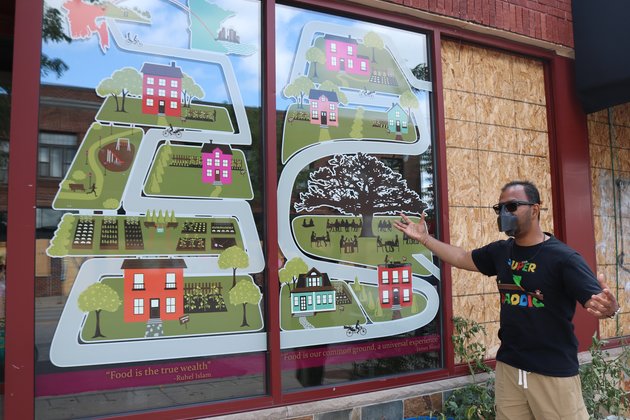 Ruhel Islam gazes at where the kitchen used to be as he walks around the charred ruins of his Gandhi Mahal Restaurant. A tandoor, a type of grill used for South Asian meat dishes, sticks out from a heap of rubble.

Islam, a native of Bangladesh, immigrated to the United States in 1996 and after several years in New York, he moved to Minneapolis and opened Gandhi Mahal in 2005.

The popular eatery was one of many businesses that was damaged or destroyed in a wave of violence that struck the city in May after George Floyd, a Black man, died in police custody after being accused of passing a counterfeit $20 bill at a local store.

Floyd, who died after a white police officer pressed his knee into Floyd's neck for what officials said was 8 minutes and 46 seconds, was captured on a bystander video that went viral, sparking sometimes violent protests in Minneapolis and in other cities across the United States.

When Islam learned what had happened to his restaurant, located just 4 kilometers from where Floyd was apprehended, he was understandably upset but nevertheless backed demonstrators' demands for change.

"This is a very deep problem we need to solve. It's not their fault," he said of the protesters. "It's the system's fault. Our policymakers did not resolve the issues and that's why this happened."

He also said his pain and loss paled in comparison to what Floyd's family had suffered. "Let my building burn," he said in remarks that were widely quoted at the time. "Justice needs to be served."

Islam continues to support the Black Lives Matter movement despite the destruction of his restaurant, saying the South Asian community needs to show solidarity with African Americans because both groups are minorities and people of color.

"It's very important to stand with them shoulder to shoulder and fight for what's right for everyone for a better world."

People across Minneapolis and from other parts of the country have been raising money to help cover Islam's uninsured losses.

Among those seeking to help is Rachael Joseph, director of Survivors Lead, a group run by gun violence survivors to press for stronger gun laws. She started a fundraiser on Facebook for the restaurant and raised over $64,000, far exceeding her own expectations.

"When I think of the kindness Gandhi Mahal showed us as gun violence survivors at Survivors Lead, I know that I'm just one person and we are just one organization," she wrote in an e-mail to VOA. "Ruhel and his family showed the same kindness to all who entered those doors and they have been boots on the ground fighting white supremacy alongside the community."

Islam recently signed a lease on another building in the same neighborhood to provide carry-out and delivery to patrons until the Gandhi Mahal can be rebuilt. The new facility, which will be named Curry in a Hurry, is expected to be ready by September.

Meanwhile, Islam is in talks with several community organizations including Pangea World Theater, a local non-profit theater company, to re-create his restaurant as part of a multicultural community center.

The theater, which features ethnically and racially diverse artists from various communities, is dedicated to addressing human rights issues and fostering conversations about race, class and gender through artistic performances.

Founder and artistic director Dipankar Mukherjee, a close friend of Islam's, said the Gandhi Mahal used to host many of the theater's social and musical events, and he has many fond memories of time spent there.

"It's heartbreaking to even sit here," he said while looking at the remains of the restaurant during an outdoor interview.

Mukherjee hopes that the new building will be big enough to host Pangea's theatrical shows, including more projects focusing on Black lives.

"Collaborative politics is our spine. That's why collaboration with Ruhel is a given," he said. "He's a brother from back home who's committed to food justice, environmental justice."

Islam has many big ideas for the new building. Even though the project is still in the planning stages, he envisions it being an "institute for peace," a place where activists and community organizers can gather to discuss issues such as food security, climate change, and social justice -- things that Islam has always been passionate about.

He is also interested in an international design collaboration and working with architects and engineers of color from different parts of the world, including his native Bangladesh.

"I want to lead by example," Islam said. "I want to do something more. It's not about making money, but bringing people together.

He aims to create a plaza in front of the restaurant that will feature some type of Black Lives Matter memorial. He also dreams of designing one of the world's most green and sustainable buildings by putting solar panels on the roof, using compostable bricks for construction, and including a greenhouse.

Islam believes that rebuilding the restaurant, which will also function as a community gathering place, will help revitalize what has become a largely abandoned area since the riots.

Islam estimates the ambitious project will cost close to $10 million and take three to five years to complete, but is not discouraged.

"We'll be rising from the ashes," he said. "I believe in the dream, and if you work hard toward your dream, you can get there."