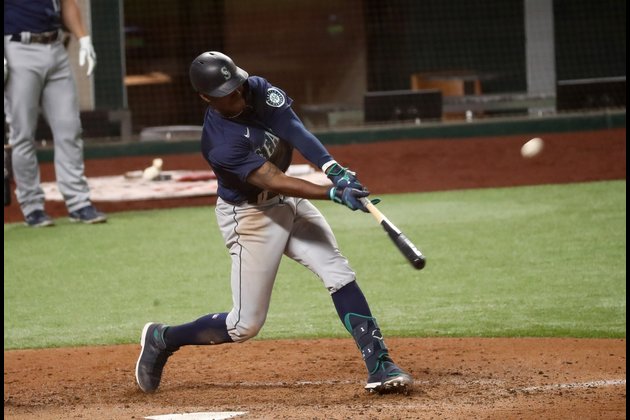 Kyle Seager had a grand slam, and Kyle Lewis blasted a three-run shot as the Seattle Mariners routed the Texas Rangers 10-2 on Monday in the opener of a three-game series between the American League West rivals in Arlington, Texas.

After scoring a combined 10 runs in their past four games, three of those contests losses, the Mariners came alive against Texas on Monday, ripping three home runs in their first-ever game in the Rangers' new ballpark.

It was the first time the retractable roof had been open for a regular-season game at Globe Life Field.

Dunn walked three and struck out two, leaving after the sixth inning with a 9-2 lead. The 24-year-old right-hander worked out of a bases-loaded jam in the fifth inning, recording both of his strikeouts in the latter frame with two on and no out and escaping without allowing a run.

Anthony Misiewicz, Matt Magill and Taylor Guilbeau each pitched a scoreless inning in relief for Seattle.

The Mariners, who have won two straight, recorded 15 hits off six Texas pitchers, led by Lewis and Dylan Moore with three hits apiece. Moore added had a solo home run and three RBIs. Every Seattle player had at least one hit in the win.

The loss snapped a season-best three-game winning streak for the Rangers. Willie Calhoun had an RBI triple, a single and a sacrifice fly, and Nick Solak singled twice for Texas' eight-hit attack.